Dogs Cause Crash and Injures Motorcyclist

Dekalb County, IN (April 30, 2021) - Two dogs ran in front of a motorcycle Wednesday afternoon causing a crash and injuries to the motorcycle driver.

At approximately 1:05 p.m., officers with the DeKalb County Sheriff’s Department were dispatched to the 600 block of S.R. 327 for a motorcycle crash. Responding officers report that Keith Reinig, 65, of LaGrange, was driving a Kawasaki motorcycle southbound when two dogs ran into the roadway and were hit by the motorcycle. 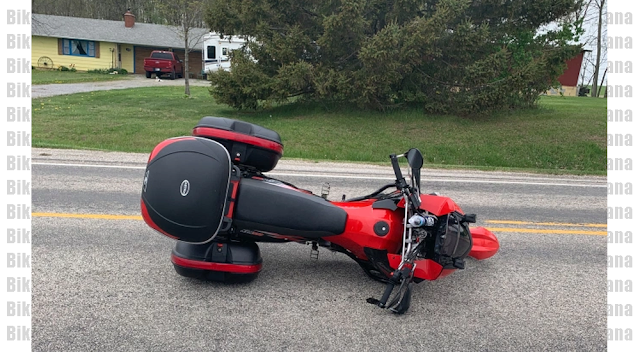 Photo: DeKalb County Sheriff’s Department
In an attempt to slow down, Reinig hit the brakes causing a skid and fell off the motorcycle, the press release said.

Officers report that Reinig was transported to an area hospital for leg, ribs and elbow injuries. Both dogs had minor injures and did not need to be treated.

The owner of the two dogs was found and cited for not containing the animals on the property, the press release said.
Source: Wane
Email ThisBlogThis!Share to TwitterShare to FacebookShare to Pinterest
Labels: Crash, Indiana, Motorcycle, Wreck
Newer Post Older Post Home